How to design a distributed ID counter?

In a complex distributed system, it is often necessary to uniquely identify a large amount of data and messages, such as the ID primary key of sub-database and sub-table, the request ID of distributed tracing, and so on. 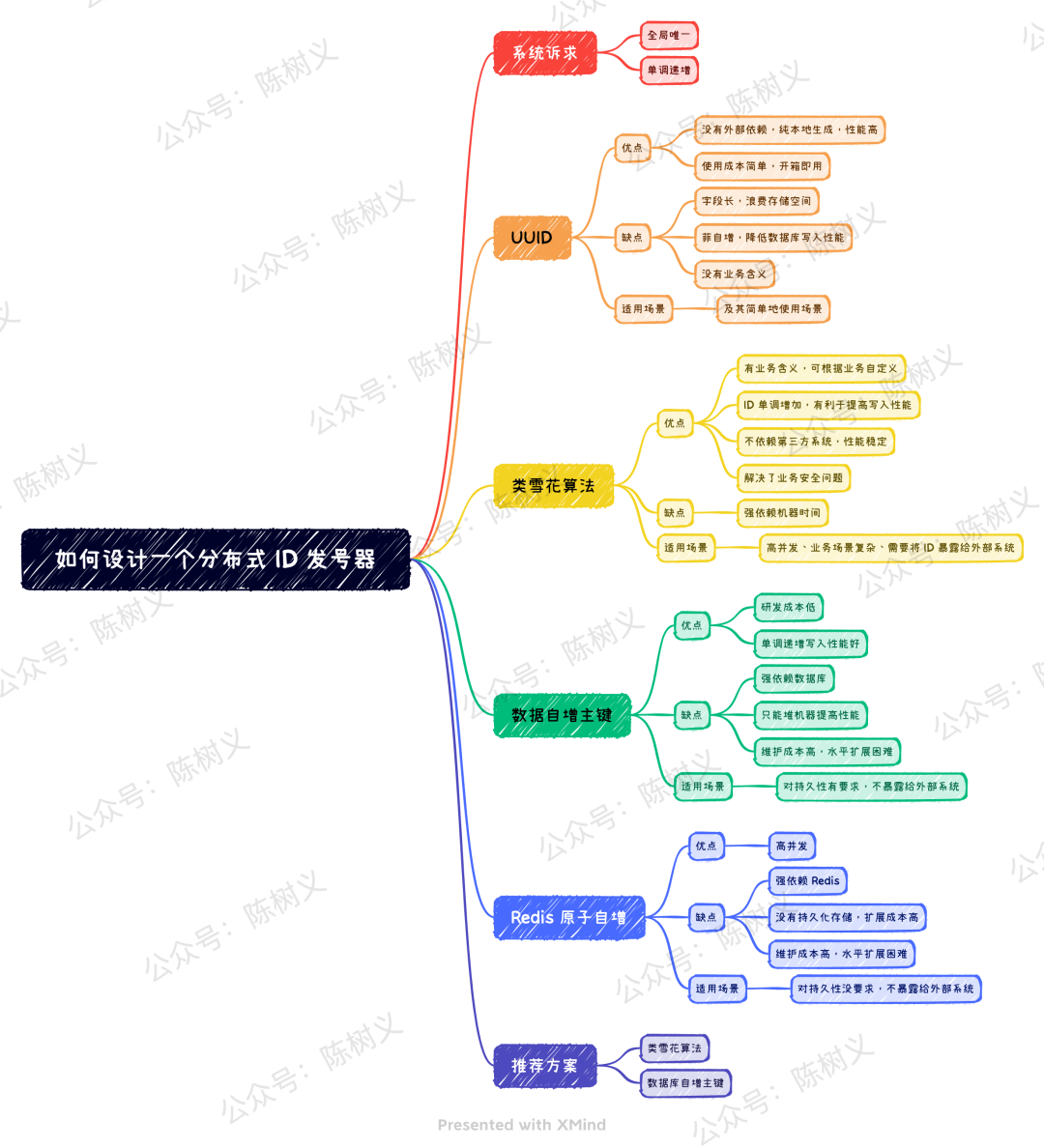 For business systems, there are generally the following requirements for globally unique IDs:

For the above two requirements, the first point is required by all systems. The second point is not required by all systems. For example, the request ID of distributed tracing does not need to be monotonically increasing. For those scenarios that need to be stored in the database as an ID gradually, it may be necessary to ensure that the globally unique ID is monotonically increasing.

In addition, we may also need to consider security aspects. If a globally unique ID is sequentially incremented, it may cause business information leakage. For example, if the order ID is incremented by 1 each time, the competitor can know the number of our daily orders directly through the order ID, which is unacceptable for the business.

For the above demands, there are many unique ID solutions on the market, among which the most common solutions are as follows:

For the unique ID solution such as UUID, the advantage is that there is no external dependency, and it is purely locally generated, so its performance is very high. But the disadvantages are also very obvious:

Fields are very long and waste storage space. UUID is generally 36 strings in length. If it is stored as the primary key of the database, the storage space of the index will be greatly increased.

No business implication. UUID has no business meaning, we can't get any meaning from UUID.

Therefore, for UUID, it is more suitable for non-database ID storage, such as generating a local distributed tracing request ID.

Snowflake algorithm (SnowFlake) is Twitter's open source distributed ID generation algorithm. The idea is to use 64 bits to represent an ID and divide the 64 bits into 4 parts, as shown in the following figure.

The advantages of the snowflake algorithm are:

Snowflake algorithm can be almost perfect, but it has a fatal disadvantage - strong dependence on machine time. If the system time on the machine is dialed back, that is, the time is slower than the normal time, there may be a situation where the number is repeated.

At present, the implementation of open source signal generators of many domestic manufacturers is based on the snowflake algorithm, such as: Baidu's open-source UidGenerator, Meituan's open-source Leaf, and so on. The core of these snowflake-like algorithms is to divide 64 bits more reasonably, making them more suitable for their own scenarios.

Speaking of unique IDs, we naturally think of the self-incrementing primary key of the database, because it is unique.

In the case of low concurrency, we can directly deploy one machine, insert a piece of data into the database table every time we get the ID, and then return the primary key ID.

The advantage of this approach is that it is very simple and low cost to implement. In addition, the generated unique ID is also monotonically increasing, which can meet the requirements of database write performance.

But its shortcomings are also very obvious, that is, its strong dependence on the database. When the database is abnormal, it will cause the entire system to be unavailable. Even if high-availability switching is performed, when the data synchronization is inconsistent during master-slave switching, it may still cause repeated numbering.

In addition, because it is a single-machine deployment, its performance bottleneck is limited to the read and write performance of a single MySQL machine, and it is destined to be unable to undertake high-concurrency business scenarios.

For the performance problems mentioned above, we can solve them through cluster deployment. The ID conflict problem after cluster deployment can be solved by setting the incremental step size. For example, if we have 3 machines, then we set the increment step to 3, and the ID generation strategy for each machine is:

This method solves the problem of cluster deployment and ID conflict, and can improve the capacity of concurrent access to a certain extent. But its disadvantages are also more obvious:

Only rely on heap machines to improve performance. When the requests increase again, we can only heap machines indefinitely, which seems to be a physical defense.

Difficulty scaling horizontally. When we need to add a machine, its processing is very troublesome. First of all, we need to deploy the new server first, set a new step size, and set the starting value to an impossible value. After the newly added servers are deployed, the old servers are dealt with one by one. This process is really painful. It can be said that it is human flesh operation and maintenance.

Since Redis is an in-memory database, its powerful performance is very suitable for high-concurrency distributed ID generation. To implement self-incrementing ID based on Redis, it mainly uses the INCR command in Redis. This command can increment a number by one and return the result, and this operation is an atomic operation.

The distributed ID function is realized through Redis, and its mode is similar to that of self-incrementing ID through the database, except that the storage medium is changed from hard disk to memory. When a single Redis cannot support concurrent requests, Redis can also be solved by cluster deployment and setting the step size.

However, there is a problem with the self-incrementing primary key of the database, and the method of Redis self-incrementing ID also has the same problem, that is, it can only heap machines, and it is difficult to scale horizontally. In addition, compared to the persistence of database storage, Redis is a memory-based storage, and the problem of persistence needs to be considered, which is also a headache.

After seeing so many solutions for distributed ID, which one should we choose?

When we are making decisions, we should determine the dimensions of the decision. For this problem, the dimensions we should pay attention to are roughly: R&D cost, concurrency, performance, and operation and maintenance cost.

Secondly, for the snowflake-like algorithm, it is undoubtedly a very good implementation. Compared with UUID, it not only has the advantages of locally generated UUID and does not rely on third-party systems, but also has business implications, can improve writing performance, and solve security problems. But its disadvantage is that it needs to implement the code of the snowflake algorithm, so its development cost is slightly higher than that of UUID.

Let's sort out the above four implementations and summarize them into the following comparison table:

In general, if you consider long-term use, then operation and maintenance costs and high concurrency must be considered. Under this basic condition, the snowflake-like algorithm and database auto-increment ID may be relatively good choices.