The social app once used by 500 million users is about to shut down original Featured
How to handle the internal personal information of Hefeixin users, China Mobile official said that it will be stored in accordance with national laws and regulations and privacy policies, and will be deleted in batches when the storage period expires.

Not long ago, China Mobile's official website issued an announcement: Hefeixin business will stop providing services from September 30, 2022, and then you will not be able to log in and use Hefeixin. 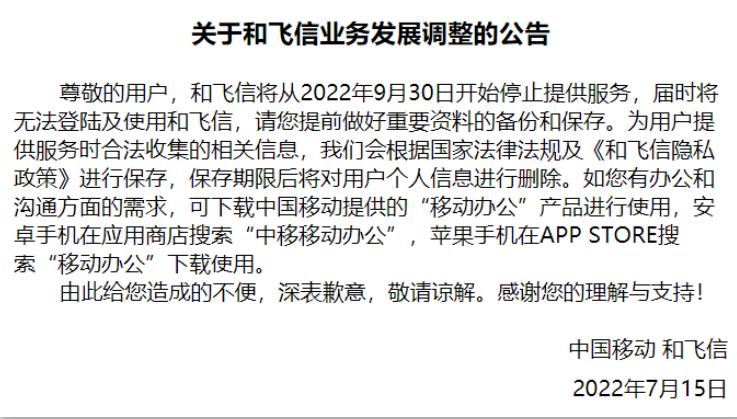 How to handle the internal personal information of Hefeixin users, China Mobile official said that it will be stored in accordance with national laws and regulations and privacy policies, and will be deleted in batches when the storage period expires.

Many users may have heard of He Caiyun network disk, but as to what this "He Fetion" is, they have never heard of it.

But if we talk about its predecessor, many users born in the 70s, 80s, and 90s should be familiar with it. In fact, it is the former communication and chat artifact "Fetion".

This topic has sparked heated discussions in the 51CTO technical community.

Qunyou [looffy]: I used it many years ago, I thought it had been discontinued long ago.

Qunyou [Yi Tian]: I remember that when it was most open, it was free to bind a mobile phone to send text messages. It was very cool. I don’t have to worry about the lack of text messages anymore. There is only one problem. It can’t be sent between non-mobile phones. A non-mobile phone number is registered. After many years, I re-logged it again and changed many versions. It may be that the number of users has dropped sharply, the number of tests is not enough, and there are bugs everywhere.

Qunyou [Liang Fei] 4G represents the rise of the mobile Internet, and the SMS function has been weakened to accept "verification codes". It is difficult to say whether the Metaverse will replace WeChat in the 5G era. China Mobile, China Unicom, and China Telecom are equivalent to the State Grid. They are providers of infrastructure services, builders and providers of information highway infrastructure, and operators cannot control what vehicles run on them.

Qunyou [Ahu]: It is regarded as a simple communication tool, and the community operation has not been implemented. For users, free SMS has a certain stickiness, but with the development of the Internet, the SMS function is gradually weakened, and Fetion is gradually lost. the market.

No one could have predicted that, as a former social giant, Fetion would exit in this way, which is really embarrassing.

Before the advent of smart phones, most of the models on the market were still feature phones, and text messages were a very important feature.

If you can’t understand it, please explain it from another angle. You can get the weather through SMS, subscribe to news through SMS, check marriage through SMS, etc. The SMS at that time can replace most of the apps in mobile phones now.

According to the statistics of mobile short message service volume released by the National Bureau of Statistics, since 2006, the number of short messages sent by Chinese mobile phone users has been increasing by 100 billion every year. 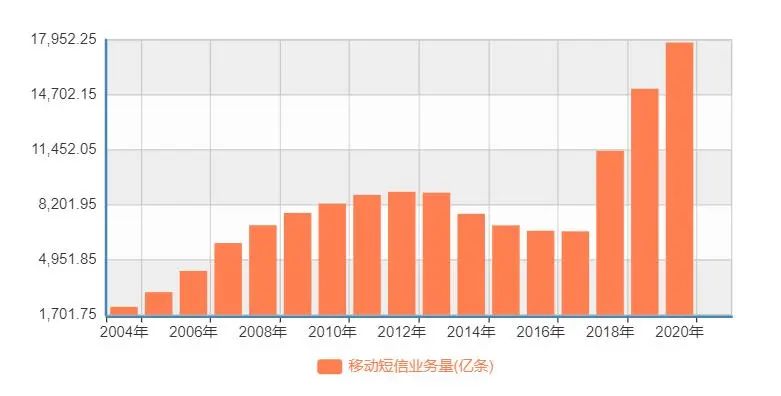 And this time period is also the era of the transition from 2G network to 3G network. The network is not developed, and the traffic is very expensive. 5 yuan 30MB/month, looking at it now, it is possible to swipe a short video, read an article, and send a few QQ, one month of traffic is used up.

Therefore, the instant communication capability of SMS and the price of 0.1 yuan per message make it one of the most convenient ways of social life.

So in 2007, after realizing the huge demand in the market, China Mobile officially launched the comprehensive communication service "Fetion", which integrates functions such as SMS, Internet access, and interactive voice response. 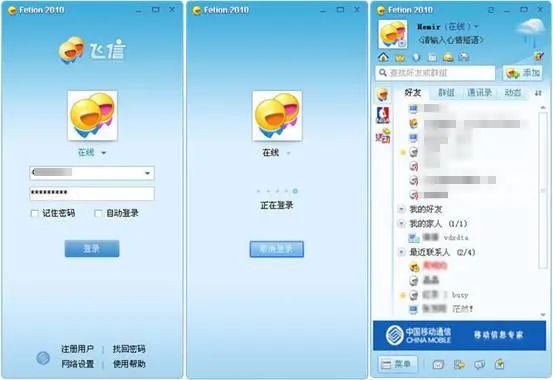 In fact, except for SMS, most of the functions were already implemented by QQ at that time, and they were more interesting than Fetion. However, in the era of feature phones, one of the most important factors hindering the development of QQ is the expensive traffic fee. Most consumers do not I am willing to keep my QQ login status all the time, and I usually log in every few hours to check the news, so it is difficult to receive the news in time.

Backed by China Mobile, Fetion realizes the function of sending unlimited mobile text messages to friends for free directly from the computer, web page or mobile phone. Even if the other party does not log in to Fetion, the message will be sent directly to the system SMS.

Relying on a good reputation and the promotion of various activities, Fetion ushered in a golden age.

According to the statistics of the data agency at that time, there were 500 million registered users around 2010, and the number of active users during the peak period was close to 100 million. This was a very terrifying number in the era when the Internet was not particularly developed. Almost all mobile users or More or less contact with Fetion.

If everything develops in a good direction, perhaps the current "WeChat" should be "Fetion".

However, with the advent of the era of smart phones, the mobile Internet has entered a stage of rapid development, and the price of traffic has gradually changed from the original 20 yuan to buy 30MB to 20 yuan to buy 30GB.

Fetion, which is based on free text messages, will inevitably be eliminated if it does not change.

Fetion has fallen to a trough in just a few years. In addition to external factors, there are also problems of its own.

For example, Fetion can only be used between mobile users at first, and non-mobile users cannot use and register Fetion at all. This function was not opened until 2012.

And the free SMS service is only available to mobile users. If you send it to China Unicom or Telecom users, it is 0.01 yuan per message, and if you reply to friends from other operators, it is also 0.01 yuan per message. After the advent of the era, the price of traffic tariffs has been reduced, consumers are no longer sensitive to traffic, and limited free has no advantage.

At the same time, a large number of instant messaging tools with richer functions emerged during the same period, including Mi Chat and WeChat.

In December 2010, the newly established Xiaomi took the lead in launching Mi Chat, which can be used on any mobile phone that can install the software.

Tencent also smelled this market, and after about 2 months, WeChat went public.

In one sentence, it is "no grass grows wherever you go". With Tencent's huge user system, it almost swept the instant messaging tool market at that time. Of course Fetion is also included.

After the launch of WeChat, the user's stickiness has been continuously deepened through interesting functions such as the official account, shake, and drift bottle. However, the Fetion function is too single, the version update is too slow, and there are no good derivative products.

For example, the video calling function launched by WeChat in 2012, Fetion was not launched until 2013.

Coupled with the frequent occurrence of problems such as transmission delay and loss of information, it gradually loses its attractiveness to users.

At the same time, the existence of Fetion products in the operator's enterprise is also one of the reasons for its loneliness.

A former Fetion employee once denounced this problem.

It probably means that one company develops Fetion, operates another company, and operators in various provinces are responsible for promotion. When there is a conflict of interests, I am afraid that no one is willing to take the initiative to make Fetion better.

Just dragged on until 2017, Fetion was renamed "Hefeixin", and the transformation was geared towards the corporate office group, which is somewhat similar to the current DingTalk.

However, the good times did not last long, and the advantages it advertised have long been realized by software such as WeChat, QQ, and DingTalk. Hefeixin, which lacked core competitiveness, was eventually abandoned by the tide of the times.

It can only be said that the original intention of launching Fetion was good, but in the development process, it may be the confusion of mobile's internal structure, the blind self-confidence brought by success, or the attitude of being content with the status quo, which led to the current end.

But it is precisely because of Fetion's exploration of instant communication tools that it provides a direction for the development of subsequent communication tools. This may be the meaning of "the predecessors planted the trees and the later generations enjoyed the shade".

Fetion is like a microcosm of the development of the Internet. No company can be a strong player forever. Only continuous optimization and innovation can keep users.